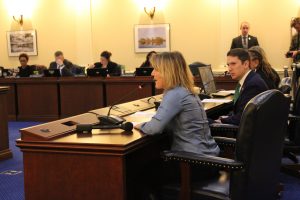 A new webinar, including Delegate Stewart, Green Amendment founder Maya van Rossum, as well as others from the strong and growing coalition being organized by our partner Waterkeepers Chesapeake can be viewed here.  (Photo of hearing to right.)

van Rossum joined Delegate Stewart, Waterkeepers Chesapeake and youth leaders from around the state testified in support of the Green Amendment proposal at a hearing held February 19, 2020.  While the Green Amendment did not advance out of committee, the hearing demonstrated powerful support for the concept.  View hearing video here.

May 2019, Maya van Rossum, the founder of the Green Amendments For The Generations movement was honored to deliver the keynote address at the annual Rachel Carson Open House in Maryland, hosted by the Rachel Carson Landmark Alliance, in the same house where Carson wrote the seminal Silent Spring. The mission of the Green Amendment movement resonates with Rachel Carson’s visionary observation that “if the Bill of Rights contains no guarantee that a citizen shall be secure against lethal poisons distributed either by private individuals or public officials, it is surely only because our forefathers, despite their considerable wisdom and foresight, could conceive of no such problems.”

The Maryland Green Amendment, as proposed, would explicitly protect the right to a healthy environment now and in the future by enshrining it in the state’s declaration of rights. It proposes lasting protections for breathable air, drinkable water, and makes the state a fiduciary for equal access to a healthy environment. It establishes nature as a trust held in common, with the state as trustee, and includes the right to a balanced and stable climate.

On March 6, 2018, Maryland’s Senate Committee on Education, Health, and Environmental Affairs held a hearing regarding the first modern iteration of a proposed Maryland Green Amendment.   The legislative session ended without a vote being taken on the proposal.  This was fine because while the proposal had many of the basic fundamentals needed in a successful Green Amendment, there was also some language of concern that Green Amendments For The Generations advocated be removed or changed. You can read about that in the testimony submitted by clicking here.

A second proposal was advanced in 2019, HB 472.  The Committee on Environment and Transportation held a hearing on February 20, 2019 with many speaking in support.  You can read the testimony submitted by Green Amendments For The Generations founder Maya van Rossum here.  Again, no vote was actually taken.  And ultimately the proposal was withdrawn for a variety of reasons having nothing to do with the public support for the Maryland Green Amendment or the support of key legislators.  It was a political decision but one that should not stop forward progress.

The community effort to pass a Maryland Green Amendment is growing.  If you are interested in being a part of the effort, or have any questions, please get in touch with us.

The 30 Day session is officially underway in #newmexico and we couldn't be more excited for our champion Representative Joanne Ferrary signing her name to the roster for the #GreenAmendment for the session! And of course we are overjoyed to have our founder and The Mother of The Green Amendment Maya K. van Rossum to be in New Mexico advocating for the Green Amendment ! ... See MoreSee Less

The 30 day session is officially underway in #newmexico and the #nmgreenamendment has some powerful voices supporting it! One such voice is Artemisio Romero y Carver. Arte is a powerful activist for protecting our planet for future generations!
www.youtube.com/watch?v=Bz1PB8yhOQI
... See MoreSee Less

GAFTG websites use cookies to enhance your interactions with our websites, improve your experience and to understand how our websites are used. By continuing to use our sites (or closing this notice) you are giving us your consent to do this. Learn more about the use of cookies on our Privacy Policy page.