March 2012, the Delaware Riverkeeper Network, Maya van Rossum the Delaware Riverkeeper, seven municipalities, and Dr. Mehernosh Khan filed legal action challenging Act 13, which was signed into law by Governor Corbett on February 14, 2012.  Act 13 amended the Pennsylvania Oil and Gas Act, and was, without a doubt, an incredible overreach and giveaway to the gas drilling industry. Supportive legislators are quick to acknowledge that the industry helped them write the legislation displacing local zoning and providing automatic waivers for the minimal environmental protections, are among the many giveaways the law provided.

The plaintiffs challenged the new law on the grounds that, amongst other things, violated Article 1, Section 27 of the Pennsylvania Constitution and endangered public health, natural resources, communities and the environment.

On December 19, 2013, the Pennsylvania Supreme Court issued a final in the case Robinson Township, Delaware Riverkeeper Network, et al.  v. Commonwealth, 83 A.3d 901 (2013).  In the plurality opinion written by the Chief Justice of the Court, the justices vindicated the importance and power of the Environmental Rights Amendment of the Pennsylvania Constitution; it promised all generations of Pennsylvanians that they will benefit from pure water, clean air and a healthy environment, giving them the ability to defend that right in the courts if it is violated. While the amendment had been proposed by Senator Kury and added to the PA constitution in 1971, it was not until this legal challenge that the amendment was seriously considered by the PA Supreme Court.

The battle to fully define and defend the environmental rights of the People of Pennsylvania continues with important and incremental successes advancing each year.

Important court opinions that continue to advance the right in PA  include:

In addition, we are starting to see government officials rely upon the Pennsylvania Green Amendment, Art 1, Sect 27, in decision making.  A great case in point is the decision by Governor Wolf to veto a bill that would have curbed the right of towns and cities to regulate use of plastic shopping bags – when announcing the veto the Governor said that its passage would have violated the Environmental Rights Amendment of the PA Constitution.

Article 1 Section 27 Campaign: In January 2019, a coalition of organizations and individuals called the Better Path Coalition organized a campaign to claim this right and tell Harrisburg that it’s time to uphold PA’s Green Amendment and be the climate and environmental champions we need. The Delaware Riverkeeper Network, as a proud member of the newly formed Better Path Coalition, worked with our partners to organize events celebrating Article 1, Section 27 of the PA Constitution—a day of action on Sunday, 1/27 and a delivery of this petition to every office in the capitol on Monday, 1/28 with the help of the children whose futures are on the line. 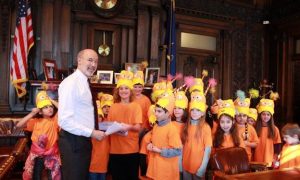 The events focused on reminding Pennsylvania’s legislators of their constitutional duty to protect environmental rights.  The IPCC report on climate change released in 2018 is dire. We have just 12 years left to address climate change. Meanwhile, industries continue to pollute Pennsylvania’s communities in myriad ways and Pennsylvania’s legislators and governors continue to allow the mass expansion of fracking, a primary source of one of the most dangerous climate changing emissions – methane. Young people from elementary through college age were among those that took the podium and spoke up at a press conference held at the PA Capitol building. Dressed as Dr. Suess’ character The Lorax, these young people then delivered petitions to Governor Wolf and other lawmakers, urging them to uphold Article 1 Section 27, Pennsylvania’s Green Amendment.

The 9,000 petitions delivered demanded that our newly elected representatives and those who returned to Harrisburg uphold Pennsylvania’s Green Amendment, which happens to be one of only two Green Amendment’s in the country. We want elected officials who will lead on climate, take aggressive action against pollution and environmental degradation, and prevent new sources of pollution and degradation from damaging PA communities. The petition read:

You will serve during the period climate scientists agree is the last chance we have to act if we are to avoid the worst impacts of climate change. You will also be charged with taking on threats to our water, air, and environment that have harmed our communities and natural resources, in some cases, for years.

Pennsylvania’s constitution contains the strongest environmental rights amendment in the country. Article 1, Section 27 says “The people have a right to clean air, pure water, and to the preservation of the natural, scenic, historic and esthetic values of the environment. Pennsylvania’s public natural resources are the common property of all the people, including generations yet to come. As trustee of these resources, the Commonwealth shall conserve and maintain them for the benefit of all the people.”

We call on every newly-elected official and every elected official who returns to Harrisburg in 2019 to fulfill their Constitutional obligation to uphold Article 1, Section 27 by taking aggressive action to address the urgent environmental and climate challenges that confront us and establishing policies that prevent new sources of pollution from entering the Commonwealth.

The Board of Commissioners of Marple Township, PA voted unanimously to reject a proposed residential development plan that would clear-cut 89 acres of forest of the Don Guanella woods. The Don Guanella woods is a 178-acre forest that has provided many environmental, health and recreational benefits to Delaware County for years. The township Board of Commissioners knew they had an obligation to uphold Article 1 Section 27 of the Pennsylvania Constitution and the environmental rights of the people of Pennsylvania.

In presenting his argument to reject the proposal, Board Member Michael Molinaro said:

I look at this as a fiduciary duty because as township officials, we’re elected to do what’s best for our township. And I’ve listened to people, and I’ve heard what they said, and I’m not going to say anything different because we have a duty under I believe under Article 1 Section 27 of PA constitution to protect and preserve the Commonwealth’s natural resources…I personally believe this [Article 1 Section 27] trumps everything else, any code you may have, any by right you say you may have, anything else. This is the role of us as municipal government is to protect our natural resources as best we can, especially when there’s not that many left. I mean if you look at Delaware County, and you look at this area, this is it. This is the last little piece that we have, and we’re not, and I’m not, going to let houses be built on it. So I believe this is our duty to protect these woodlands for not only us, not only Delaware County, PA, but also for future generations, so they can look back and say, ‘You know, this board stood up to this builder, and they did what was right.’

In September 2022, the United States Court of Appeals for the Third Circuit affirmed a lower court decision dismissing a legal challenge to a Delaware River Basin Commission ban on fracking operations within the Delaware River Basin. The suit was originally brought by House Republican Senators seeking to overturn the fracking ban. However, judges upheld the ban, determining that plaintiffs lacked standing under Article 1 Section 27 of the Pennsylvania State Constitution.

Read more about the decision here.

LEARN ABOUT PENNSYLVANIA’S GREEN AMENDMENT WITH THESE INFORMATIVE VIDEOS:

SHAREABLE REVIEWS OF HOW THE PENNSYLVANIA GREEN AMENDMENT IS PROTECTING ENVIRONMENTS AND COMMUNITIES CAN BE FOUND HERE:

Gift giving season is the perfect time to start planting the seeds and providing the tools to get your friends, family, coworkers, etc into an eco-mindset and green lifestyle. Listen in to hear some of our top recommendations for great Eco-Gifts this season and how you can give a gift and support your favorite nonprofits! #greengenespod #podcast #giftideas open.spotify.com/episode/3YbhZxqVwmpHS5zGek7L7b?si=ymxnb9rwTwOb0ZjRZYsTCQListen to this episode from Green Genes: A Mother Daughter Duo Fighting For Our Planet on Spotify. From supporting your local nonprofits, making your own homemade gifts, or finding treasures in a craft show, eco-gifts are the perfect way to get your loved ones in the earth loving groove. Maya and An... ... See MoreSee Less
View on Facebook
· Share

Thursday, December 8, 2022, 7pm.106 Kings Highway EastHaddonfield, NJ#GreenAmendment author and founder Maya van Rossum and NJ Senator Andrew Zwicker will be speaking together at Inkwood NJ about what we're doing to get a constitutional amendment passed in the state of New Jersey to guarantee our right to a clean, safe, and healthy environment. Join us in person! This will be a great opportunity to get a signed copy of Maya's new book in time for the holidays.inkwoodnj.com/events ... See MoreSee Less

How can we protect our environmental rights?Reminder to join us tomorrow, virtually or in person at Western Washington University!December 1st, 4:30pm, to learn more:cenv.wwu.edu/speaker-series/rhetoric-reality-green-amendments-new-path-environmental-protection#wagreenamendment #GreenAmendment #environmentalrights ... See MoreSee Less

From Rhetoric to Reality: Green Amendments as a New Path for Environmental Protection | College of the Environment | Western Washington University

For decades, communities have relied on Federal and State laws to ensure protection of a clean environment. And for decades, while achieving some important successes in environmental protection, overa...
View on Facebook
· Share