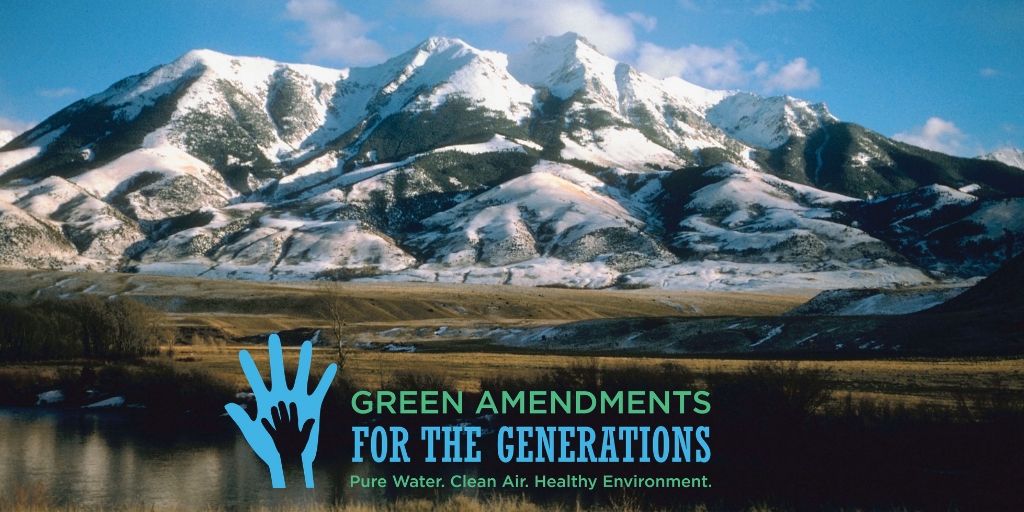 Montana, like Pennsylvania, recognizes and protects the right to a healthy environment in the declaration of rights section of its constitution. August 5, 2021: Montana Judge Kathy Seeley ruled in favor of sixteen youth plaintiffs who are suing the state for its promotion of a fossil fuel-driven energy system as a violation of their constitutional right to a clean and healthful environment. Judge Kathy Seeley denied the state’s attempt to dismiss the case, Held v. State of Montana, and will allow it to proceed to trial. This decision is a critical victory for constitutional environmental rights and affirms the strength of the Green Amendment in the courts of Montana. Read GAFTG’s full press statement here.

The Montana Constitution reads as follows:

This Declaration of Rights language is enhanced by the following additional provisions in the Montana constitution:

Three key legal cases that help to demonstrate the power and importance of Montana’s provision for environmental protection include:

You can read more about the landmark MEIC case from the organization that one this important victory, MEIC, at their website.

You can learn about how the MEIC and Cape France Enterprises cases help set the trajectory for the power and importance of Green Amendments in the award winning book The Green Amendment.

Below is a review of the 2020 Lucky Minerals case which confirmed some of the most powerful benefits of a constitutional Green Amendment. 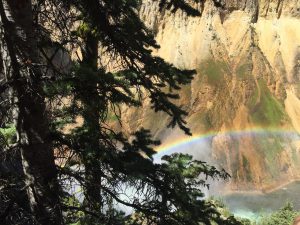 Park County Environmental Council and the Greater Yellowstone Coalition challenged a license given to Lucky Minerals Inc. by the Montana Department of Environmental Quality allowing gold mining exploration activities on property the company owned.  The industrial mining investigations and future operations would to take place in Emigrant Gulch, located just 15 miles North of Yellowstone National Park, and would include drilling 46 holes as deep as 2,000 feet from 23 developed drill pads, from mid-July to mid-October in two consecutive years.  Operations would include nighttime drilling that would require massive lighting on par with those used during nighttime highway construction activities, and would also require road development activities that would result in significantly increased access to currently inaccessible remote natural areas.  The proposed operations would damage remote natural areas with increased disturbance and habitat fragmentation, disturb and displace grizzly bears, potentially cause female wolverines to abandon their dens, threaten acid mine pollution to the Yellowstone River a highly prized trout stream, require road development that would inflict permanent harm to ecosystems important to a variety of species such as lynx, bear, elk, moose, deer and wolverine, and would inflict harm on the Greater Yellowstone Ecosystem.  Not only are the areas to be harmed ecologically important, but they are essential for supporting ecotourism in the region that is an important economic driver and job creator.

The Park County Environmental Council and the Greater Yellowstone Coalition asserted the state had failed to undertake a fully robust consideration of the environmental implications of the project before issuing the license that would allow the industrial mining exploration activities.   The legal opposition to the license included a challenge to a 2011 legislative amendment to the  Montana Environmental Policy Act (MEPA) that disallowed a court from stopping work on a project even when it determined that a state agency did not undertake the appropriate level of environmental impact analysis during its project review and approval. As a result of the 2011 Amendment, the only remedy left to concerned and impacted community members challenging state approval of a project for failure to comply with MEPA was to have the case remanded to the decision-making agency for further review while at the same time the approved project proceeded with its environmentally devastating and degrading activities.  Challengers claimed the 2011 Amendment prevented the courts from protecting the constitutional environmental rights of the plaintiffs found in Article II, Section 3 and Article IX, Section 1 of the Montana Constitution.

In 2019, the Montana Sixth Judicial District Court determined that the state had in fact failed to undertake the robust environmental analysis of impacts required by MEPA; and that by prohibiting the court from rendering an equitable remedy that would prevent the project from advancing while the state undertook required additional MEPA review the 2011 Amendment caused an unconstitutional violation of the environmental rights of the plaintiffs protected by Article II, Section 3 and Article IX, Section 1 of the Constitution.  The District Court remanded the project back to the Montana Department of Environmental Quality (DEQ or agency) for the required review and voided Lucky’s exploration license.  Lucky Minerals and the state appealed the decision to the state supreme court. 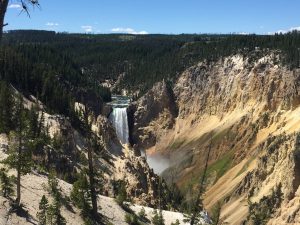 On December 8, 2020 the Montana Supreme Court issued an important ruling further strengthening the power of the Montana Green Amendment and affirming the obligation of the state of Montana to protect the environmental rights of its people.  Responding to the legal claims brought, including admissions by the state that the government agency had in fact failed to conduct a full and robust analysis of the environmental impacts of the proposed mining exploration activities including relying on a future, yet to be created, mitigation plan for some of the aspects of the harm, the court affirmed the remand to the state to undertake additional environmental reviews.

The court then addressed the constitutionality of the 2011 Amendment which prohibited courts from preventing implementation of environmentally degrading projects after determining that the state had failed to fulfill its environmental review obligations under MEPA and until such time as the legally required review and procedural steps had been completed.

The Supreme Court confirmed that the environmental rights protected in Article II, Section 3 and Article IX, Section 1 of the Montana Constitution:

The court explained that while the constitution recognizes the environmental rights of the people, it also  guarantees that government will provide remedies which are “adequate to prevent unreasonable degradation of their natural resources” and that “[t]his guarantee includes the assurance that the government will not take actions jeopardizing such unique and treasured facets of Montana’s natural environment without first thoroughly understanding the risks involved.”  The court then recognized that MEPA was passed and subsequently amended as a key mechanism to help the state fulfill its constitutional obligation to prevent environmental harms that would infringe on the rights of the people to a clean and healthful environment by ensuring the state is fully informed of the potential environmental ramifications of its decisions; thereby allowing it to prevent/avoid harm.

Responding to arguments from the state, the court made clear that the existence of other environmental laws did not/do not displace the unique constitutional value of MEPA to ensure the “ability to avert potential environmental harms through informed decision making.”   And because there was no other state law that was “equally” proactive and preventative, allowing injunctive relief that can prevent harm while MEPA is being fully and fairly complied with is essential for the state to fulfill its constitutional obligation.

The court noted that “[w]ithout a mechanism to prevent a project from going forward until a MEPA violation had been addressed, MEPA’s role in meeting the State’s ‘anticipatory and preventative’ constitutional obligations is negated.”  In short, it would mean that the error was irreversible because the adjusted review would come only after irreversible environmental degradation had been inflicted.  Notably, the cost of the state’s error in failing to conduct a full and accurate environmental assessment that would ensure a fully informed final decision, would come at the expense of the environmental rights of the people.

“[A] remedy implemented only after a violation is a hollow vindication of constitutional right if a potentially irreversible harm has already occurred.” Quoting Delegate Mae Nan Robinson who spoke during the 1972 constitutional convention.

The court recognized that if Lucky Mining were allowed to undertake its industrial drilling exploration before the state had finalized the needed supplemental reviews ordered by the court all that would have been accomplished from this litigation is that the people of Montana would have been informed — “perhaps tragically” — about the consequences of the state’s actions at a time when it was too late to avoid, prevent, mitigate or remedy the environmental harm or resulting constitutional infringement.

The court rejected the state’s assertion that the property rights of Lucky should transform the court’s review from one using strict scrutiny to one “balancing environmental rights against the private property rights also found in the Montana Constitution.”  The court emphasized that requiring Lucky to wait for the full environmental review and analysis legally required by state law did not rise to the level of a constitutional infringement on property rights and did not  change the nature of the case from one requiring strict scrutiny to one requiring a balancing of rights between the parties.  Significantly the court noted that MEPA was intended to ensure informed government decision-making and did not itself restrict Lucky’s use of its property.[2]

[2] It is notable that the court emphasized that a constitutional balancing test is implicated when there is  “an irreconcilable conflict between the co-equal rights of the parties.”  The court then explained that when “regulations are designed to have a real and substantial bearing upon the public health, safety, morals and general welfare of a community, such regualtions do not undulyinterfere with the fundamental nature of private property ownership.” In contrast, the court described MEPA as having an even lesser effect on private property rights than regulations that are designed to protect the general welfare.  And finally the court stressed the procedural nature of MEPA and that by its terms it did not speak to property rights. The court’s emphasis on legal protections with community implications versus those focused on a single entity seems notable and a potential factor in the court’s decision to raise up the environmental rights to a higher degree than the claimed property rights. This may suggest that when considering actions that implicate the environment, the constitutional environmental rights provisions might defacto place additional weight on the environmental side of the scale.

A lil teaser for the upcoming release of THE 2ND EDITION OF THE GREEN AMENDMENT BOOK! The first legislator to step up and champion the New Mexico #GreenAmendment was Senator Sedillo Lopez and now #NewMexico is a national Green Amendment leader.It is stories like her's and so many others we are excited to have come through in this book and share with you the power and growing excitement around our movement to get your environmental rights in state constitutions across our nation! Use smile.amazon.com/Green-Amendment-Peoples-Healthy-Environment/dp/1633310647/ref=sr_1_2?crid=3714HQ... to pre-order your copy of the book today! ... See MoreSee Less